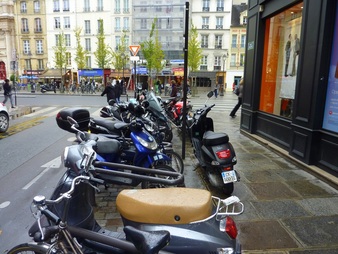 Motorcyles, scooters and bikes everywhere!
Mike has been riding motorcycle since he was a boy, so walking down the streets of Paris, passing row after row with every size, type, age and color of two wheeled transportation was like being in a candy shop for him. That first day, trying to find our way to the hotel, I would look back to see him oohing and aahing over one bike after the next. I kept trying to hurry him along, telling him he could look at motorcycles AFTER we had found the hotel, but it was difficult for him to pass them by without stopping.
By the end of the week, he knew if we were on the correct street to take us 'home' to the hotel just by which motorcycles we were walking past.
You don't see THAT at home. 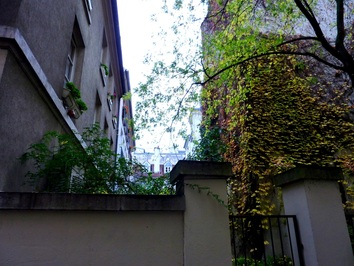 Window boxes.
We had a little bit of time to kill between checking in to our hotel and meeting the rest of our tour group downstairs in the lobby, so we took the time to stretch out in our room and decompress a little from the long, complicated trip we'd just accomplished. Our room was on the fourth floor of the Hotel Londres Eiffel, which is tucked away on a quiet, one lane cobblestone street just blocks from the Eiffel Tower. I had read on their website that some of the rooms had a view of the Eiffel Tower, so I pulled the curtains and opened the windows to see if we were so lucky.
No Tower view for us, but the view we had was even better. Across the street an elderly woman stood with her windows open wide, feeding the pigeons that strutted among the red geraniums blooming in her window box. You don't see THAT at home.
previous page
next page
Powered by