Lunch at the Louvre 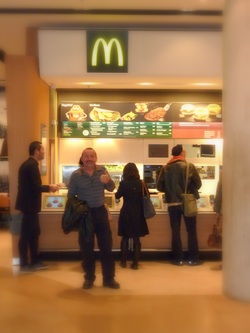 MacDonalds! At the Louvre!

Mike is not a foodie. He never has been and never will be. But he never has any trouble finding something to eat, either. He just isn't picky about food. So when I told him one of the reasons I wanted to go to Paris was because I wanted to try all sorts of wonderful French cuisine, he said that was fine, but just once while we were there, he wanted to eat at McDonalds. So when we discovered the Louvre had a McDonalds I told him now was his chance. Because I figured if you are going to eat at a McDonalds in Paris, the least you can do is pick one in a really special place. And McDonalds at the Louvre fit that bill. You don't see THAT at home.

Mike does a lot of things around the house, but one thing he has never done much of is wash clothes. However, I was tired, he needed clean shorts and the laundromat was just across the street from our hotel. If I loaded the washer and set it and the dryer, he was pretty sure he could handle a load of clothes while I took a nap. An hour later, when he returned to the room carrying an armful of clean clothes, I asked him how it went.
Evidently he had felt he was doing just fine until a little old french woman started pointing at the dryer and talking a mile a minute to him in French. He tried to explain that he didn't understand, but the woman was adamant he do something with the clothes. Mike said she followed him around shaking her finger at him the entire time the clothes were in the dryer. He never did figure out what was bothering her about his laundry technique, but he suspects she was unhappy at how hot the dryer was set. Laundry, I guess I won't see him doing THAT at home.
previous page
next page
Powered by