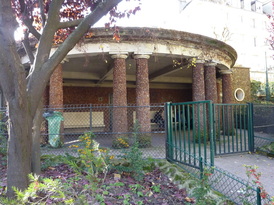 Pretty nice toilets, eh?
Some of the restrooms in Paris have both Men and Women sections in one area, separated by a low wall. The women have stalls with doors, the men must make do with urinals mostly out in the open. The restrooms also have ladies working in them who keep things clean and, as Mike found out, running smoothly.

As he walked into one restroom he noticed the turnstiles on the men's side but evidently tried to use the 'exit' one instead of the 'entrance' one. Out hurried one of the restroom ladies from her little glass booth to show him where he should go. And then she proceeded to lean against the waist high wall, talking to him, in French, the entire rest of his 'visit'. You don't see THAT at home. 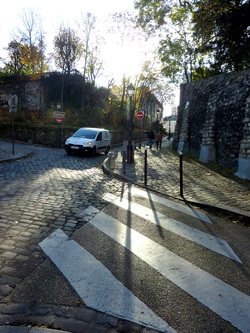 Mike couldn't get over how narrow and winding so many of the streets in the city were. He was continually commenting on how many of the cars were scraped along the sides or were missing mirrors. At home, he drives some pretty big farm trucks, and more than once I heard him say, "There is just no way we could drive one of our trucks down THAT road!"

I'm going to need some hooks to hang them on pretty soon.


I didn't go to Paris to shop, but once Rolinka taught us all the 'French' way to tie our scarves, I became something of an addict. Rolinka, our tour guide, gave our tour group (well, the women, anyway) an impromptu scarf tying lesson after the evening's wine tasting session. I don't know if she planned it that way, but the combination of wine and scarf tying soon resulted in much hilarity. I can still hear Erica, in her lovely southern accent, hollering "I didn't want y'all to catch me doin' this." after several of us stumbled upon her sitting on the stairs, tangled in her scarf, trying to get it tied before we left for dinner. Needless to say, all the women in my family have now been taught the 'French Tie' as we call it. You just can't learn THAT at home!


(Except that now you can! Follow the link below and scroll down to the directions for "The Italian Twist". This is the tie our guide, Rolinka taught us.)